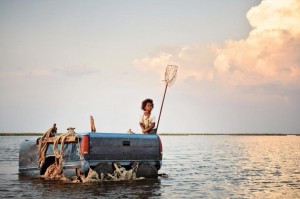 Afrika Eye Film Festival 2012 launches today, Friday 9th November, with a sensational blend of African film and Jamaican music and dance – inaugurating a festival that celebrates 50 years of Jamaican independence and pays tribute to the power of healing trauma in Africa.

Weaving the two strands of this year’s festival comes the launch film LA PIROGUE at 20.30. Winning standing ovations at this year’s Cannes festival, LA PIROGUE is the moving story of a group of Senegalese men who, desperate to escape poverty, set off for Europe on a simple fishing boat, hoping for a better life.

Directed by Moussa Touré, whose many acclaimed documentaries and dramas have chronicled his country’s social woes, the film was inspired by Touré’s experience that virtually every Senegalese family had a member who had left by boat for Europe. In the last decade over 5,000 Africans are reported to have died trying to make this perilous crossing to Europe. The film echoes the festival’s Jamaican theme in showing the lengths people are prepared to go to escape poverty.

“Moussa Touré is the next generation of great Senegalese directors, weaving poetic images and the immense evocative power of Senegalese music to the intensely dramatic story of LA PIROQUE,” says Ingrid Sinclair, Director of Afrika Eye. “This film has wowed audience on the continent and Afrika Eye is proud to launch LA PIROGUE for a series of screenings in the UK stretching from Manchester to London.”

Adroitly capturing the dilemmas facing these desperate fishermen, LA PIROGUE is a powerful depiction of a story that is relevant worldwide. Screenings of LA PIROGUE in association with Afrika Eye will follow at other UK cinemas, including Manchester’s Cornerhouse, Monday 12th November and Cambridge Picture House on Wednesday 14th November for the Cambridge African film festival. And the Curzon group in London have recently announced their interest in showing the film.

Producer/DJ Mr. Benn’s blend of reggae, hip hop and more, introduced the new Bristol sound to the world. As well as playing parties around the globe, he also DJs alongside Massive Attack’s Daddy G, Queen Bee and MC Souls Liberation as part of the Bristol Hi-Fi collective. His broad range of production techniques combined with upfront DJ and selector skills will be sure to have you jumping. Dancer and MC, Ripton Lindsay, who grew up in Jamaica, has worked with Africa Bambaata, DJ Babu and Massive Attack. Incorporating traditional and contemporary Jamaican music with hip hop and reggae, he’s a sought after tutor and a mesmerising performer.

“We are delighted to bring the dynamic duo of Ripton and Mr Benn plus artist David Cox’s vibrant images to the Afrika Eye party,” says Annie Menter, WOMAD Foundation’s Director. “Our workshop programme with these three great artists is a fantastic opportunity to extend the reach of this culturally important annual film event.”