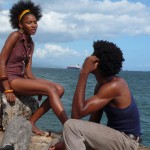 A core focus of Afrika Eye film festival 2012, Friday 9th-11th November at Bristol’s Watershed, is dedicated to celebrating 50 years of independence for Jamaica. Showing Jamaica in all its raw, gritty and glorious reality, the programme blends subtle hues of history and politics from the newest and best Jamaican films, guest curated by renowned artist of Jamaican heritage, Graeme Evelyn.

BETTER MUS’ COME – voted best film at this year’s Trinidad and Tobago Film Festival – is a classic urban love story set in the 1970s when the island was on the brink of civil war and flooded with guns. Reminiscent of the seminal Brazilian classic CITY OF GOD, the film – which portrayed plenty of violence – might seem a curious choice for a Jamaican curator showcasing his country.

Graeme Evelyn, curator of Afrika Eye’s Jamaican programme, explains: “The violence is very real. I find Hollywood’s sensationalised violence disturbing, whereas within BETTER MUS’ COME the violence is the background to the reality of what really happens in response to extreme poverty and struggle. While this is Jamaica’s first period feature film, it educates and gives an important historical context to a small island country that continues to produce high quality film supporting young emerging talent and I am very proud of that.”

While Graeme feels BETTER MUS’ COME provides a clear, raw portrayal of the turbulent period of early 70s Jamaica, he explains that he chose the film THE FADE (Sunday 11th November 14.30-16.00) – which travels to African Diaspora barbers in Ghana, Jamaica, USA and the UK – as the contemporary counterpoint of an altogether different challenge, through the lens of the barbershop.

Graeme Evelyn explains: “THE FADE is a sincere compassionate work that attempts to introduce a very important although overlooked African–Caribbean experience to a European audience. I thought of my European friends who walk past black barbers and wonder what goes on inside. It was an opportunity to show an integral cultural experience of my Afro-Caribbean childhood to a European audience produced with such sympathy, honesty and beauty.”

LIFE AND DEBT, which counterparts BETTER MUS’ COME in the Jamaican session, is a documentary showing a holiday-maker on a two week trip to Jamaica, which asks them to see why Jamaica is at the beck and call of political and banking corporate interest, giving a geopolitical sense of how emerging economies are challenged by huge banking and high finance strategies.

Graeme Evelyn explains: “Anyone from an emerging country will understand and empathise with this very powerful insightful film. Jamaica is used as an example of how the IMF and the World Trade Organisation loan agreements

impact a small country created and built up as an export nation, only for that wealth and richness of resources to have been put aside in preparation for the heavy influx of foreign importation. Heavily subsidised American companies flood the island with potatoes that Jamaicans grow themselves, putting local potato growers out of business is one such example. LIFE AND DEBT in my view is a very important documentary for our age as this economic scenario is not just affecting Jamaica, but many emerging post-colonial economies around the world.”

When Michael Manley, the then Prime Minister of Jamaica, signed the loan with the IMF Bank in the 1970s the loan agreements deprived his people of their right to sell goods at a fair price. People began to buy imports, fighting each other for them and breading a culture of scarcity. This set the context for BETTER MUS’ COME and the violence that arose from this poverty.

Graeme Evelyn says: “I don’t want to portray Jamaica as a hard luck story. So THE FADE proves that despite the difficulties, people are picking themselves up out of poverty and not relying on solely on governments or its institutions. When I go back home I see Jamaica despite its problems and disparities as a very wealthy and rich nation state with incredible natural resources. Most visitors to Jamaica want to see more than you realistically can on a two week holiday and this portrayal of barber shop culture gives you a small glimpse into the rich cultural life beyond the tourist façade.”

Afrika Eye’s celebration of Jamaica begins with the launch party (from 22.15) following the festival’s opening African film LA PIROQUE on Friday 11 November. LA PIROQUE, which features a group of Senegalese men fleeing their homeland for a better life in Europe on a small fishing boat, reflects the festival’s Jamaican theme, showing the lengths people are prepared to go to escape poverty.

Finally, a Saturday documentary screening of IN THE FOOTSTEPS OF THE EMPEROR (15.00-15.50), presented by Benjamin Zephaniah, charts Emperor Haile Selassie’s extraordinary period of exile in the city of Bath, 1936–1941. The film is followed by a talk from the film’s director, Shawn Sobers, about Fairfield House where Haile Selassie lived, and how it’s being turned into a Black Arts Centre.