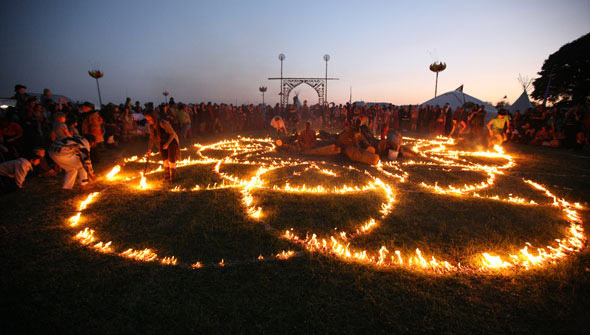 “Another world is possible”

“The festival to fill the Glastonbury-shaped hole.”
BBC News Online

Feverish anticipation awaits the return of Sunrise Celebration – the UK’s most rocking sustainable and family-friendly festival – for its seventh year, moving its dates to the Solstice Weekend of 21st-24th June, to which it owes its name and where it began six years ago during the last Glastonbury break.

The festival’s theme for 2012 – heralded year of momentous social change across the globe – is “Another World is Possible”.  With its innovative forum of practical information about deep ecology and ways to create a better world, the festival flies the flag for the new shift in consciousness, taking up the mantle from Glastonbury as “festival pioneer” of a spiritual revolution that was seeded in the 60s.

With reference to “no Glastonbury” this summer, Steve Hawkes reports for BBC News Online:

“Anyone looking for a festival to fill the Glastonbury-shaped hole left by Michael Eavis’s decision to let his land lie fallow and lend his loos to London in 2012 need look no further than nearby Bruton, in Somerset.”

Arriving at Sunrise is like stepping into a Utopian parallel world – a Burning Man-esque wonderland coloured with carnival vibes, circus and theatre performances, cabarets, visionary artists and fancy dress processions. Wander through magical new sites and landscapes including the Temple of Unity, a Tibetan arena and the Serenity Field in honour of Solstice with its astrologically aligned Stone Circle – serenaded by a wild profusion of sounds, from Psy-Trance, Dubstep and Bhangra, to Electro Swing, Balkan Gypsy and fringe sounds of the future yet to be discovered.

Powered on 100% renewable energy, Sunrise won both the Guardian’s “Ethical Travel Award” and Green Parent magazine’s “Best Festival Award” in 2011. A working template for sustainable future living, the festival’s Village Green provides a progressive learning platform for eco building, green crafts and permaculture, and Sunrise was the first festival to have site-wide compost toilets and an organic, local food and drinks policy.

A safe and nurturing environment for families, Sunrise offers enticing activities for all age groups, from Forest School, children’s games, and craft and performance workshops, to space hopping, skate ramps and a night time cabaret; and this year there’s even a tent for pregnant mums and natural birthing!

A Mecca for earth pilgrims, spiritual activists, conscious party animals and a diverse miscellany of English society, all united by an evolving common consciousness – Sunrise offers the elusive combination of the chance to learn about creating a more sustainable lifestyle while having a wildly good time.  With its fun and non-dogmatic approach, it clearly shows how to live a better life.

“Sunrise is an invitation to experience firsthand that another world is possible, and to return home empowered to be that change in the world.”

Sunrise Celebration organisers and presenters are available for interview