Can mind exist outside the human brain? 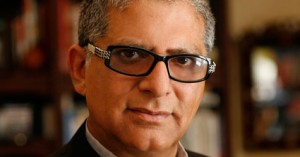 Two Open Letters last week from Deepak Chopra and several highly acclaimed scientists including Stuart Hameroff and Menas C. Kafatos, reprimanding TED’s removal from the TEDx Youtube channel of the talks by Graham Hancock (The War on Consciousness) and Rupert Sheldrake (The Science Delusion), with unsubstantiated claims of “pseudo-science” – highlight we could be on the brink of the major science revolution of our times – a revolution in our understanding of consciousness.

In their original letter, Dear TED, Is It ‘Bad Science’ or a ‘Game of Thrones’?, published in the Huffington Post (18th April), Deepak Chopra, MD. FACP, Stuart Hameroff, MD, Menas C. Kafatos, Ph.D., Rudolph E. Tanzi, Ph.D., and Neil Theise, MD suggest that the talks of Hancock and Sheldrake were removed because they endorsed ‘non-local consciousness’ – the idea that consciousness exists beyond the human brain.  Citing examples of scientific breakthroughs from Copernicus, Galileo and Einstein whose theories overthrew the prevailing body of accepted knowledge, their Open Letter stated, “The greatest breakthroughs rarely come by acts of conformity”.

In a response article, TED, Censorship, Consciousness, Militant Atheists, and Pseudo Science!, Chris Anderson, curator of TED, pointed out that for every paradigm-shifting Galileo there are thousands of bad scientific ideas, hence TED’s policy to “steer clear of talks that bear hallmarks of unsubstantiated science”.

Chopra’s response on Friday 19th April, Reply to Chris Anderson, TED and the TED Community: We’re Halfway There, But, complete with comments from 18 leading scientists, was devastating, highlighting that science only evolves with paradigm changes not by defending existing dogmatic belief systems. It also stressed that the “pseudo-scientist” label could be applied to anyone doing vital research in consciousness and its relationship with fields like physics, psychology, neuroscience.

“Fields like global climate, neuroscience and consciousness and even quantum field theory, advance through intersection of ideas and methodologies, not by censorship…We are now facing a grand revolution in scientific thought, through the dialogue between quantum theory, consciousness work, biology, and philosophy and psychology. TED has a great opportunity to help advance this transformation. I hope you do.”

“The kind of backlash exemplified by TED has occurred again and again since Giordano Bruno was burned at the stake in 1600 for proposing what astrophysicists now call “the multiple worlds theory”, and it is always is at its most vociferous and vicious as a new way of thinking is emerging. But, as Thomas Kuhn reminds us, the old guard eventually and inevitably gives way to the new.”

Currently teaching an upper-division undergraduate course entitled “Consciousness, Ethics, and the Natural World”, Kathleen Noble  asked her students what they thought about TED’s censoring of Rupert Sheldrake (whose work they had studied), and concluded from their responses:  “These are students at a mainstream research university for whom Sheldrake’s ideas are common sense rather than ‘pseudoscience’.  Clearly, this latest scientific revolution is upon us.”

Neil Theise, Professor of Pathology and Medicine at the Albert Einstein College of Medicine, Beth Israel Medical Center, added:  “Sheldrake and Hancock may be wrong in their ideas, but we do not yet know. Even if they are, the creativity of their work and their insistence on looking at aberrations and exceptions is certainly of value, at least to point the way to the kinds of creative explorations TED hopes to foster.”

And consciousness researcher Christopher Holvenstot wrote: “Experiential approaches, including Graham Hancock’s exploration of alternative states, represent an important aspect of our subject matter, and therefore our research. We are saddened to see his brave and very personal contribution disparaged as ‘pseudo-science’.”

For a brief resume of the TED censorship saga to date: TED’s removal of Hancock and Sheldrake’s talks last month sparked a mass public internet outrage, leading TED to make the talks available in limited Vimeo format on the TED website, where they can be viewed in context on this TED Blog page.  Hancock and Sheldrake both refuted all allegations of “pseudo-science”, issued challenges for a free and fair public debate (unanswered by TED) and their TEDx presentations swiftly became the most popular TED talks ever, with mass popular support calling for the talks to be reinstalled to the TEDx Youtube channel.

Meantime, TED revoked the licence for TEDxWest Hollywood ‘s conference “Brother, Can You Spare a Paradigm?” (which ultimately went ahead on 14th April without TED’sponsorship), again with claims of “pseudo-science”.  Presenters due to speak here included three scientists exploring non-local consciousness – Russell Targ, Larry Dossey and Marilyn Schlitz. While TED turned a deaf ear to criticism, the Independent on Sunday wrote about The TED conference censorship row (7th April), and the article also appeared in the Belfast Telegraph (10 April).

Commenting on the latest rebuttals of TED in the Huffington Post by Deepak Chopra and the community of scientists, Graham Hancock said:

“This controversy has brought to light a fundamental fault-line that is emerging in the science of consciousness between the old paradigm of materialist reductionism (represented by people like Richard Dawkins and Daniel Dennett) and a new paradigm of non-local conscious. The new paradigm, represented by all the scientists who wrote to the Huffington Post on 19th April is open to the revolutionary possibility at the centre of both my talk and Rupert’s talk, namely that consciousness may not be generated by the brain but rather “transceived” by the brain – i.e. that consciousness may be a fundamental “non-local” property of all dimensions of the universe and that rather than being an epiphenomenon of brain activity, it may instead be that the brain acts as an interface that allows consciousness to manifest ‘locally’ on the material plane.

“If the new paradigm proves to be correct, and it is intriguing to see these powerful voices raising that possibility, then the issue is by no means limited to consciousness but calls into question many of the fundamental assumptions on which Western science has been built for the past 400 years. It is a revolution in the making, spearheaded by quantum physics and consciousness studies, with implications for our understanding of reality that are likely to be at least as profound as the implications of the dismantling of the Ptolemaic model by the Copernican revolution from the 16th century onwards, ushering in a new age of science.”