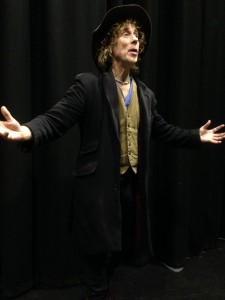 The first in a new series of educational talks for schools by BBC TV’s “Extreme Pilgrim”  Peter Owen Jones – renowned for his televised investigations of over 80 faiths around the world – was a major hit with sixth form students at Prior Park College in Bath this week.

As Peter regaled entertaining and colourful anecdotes from his Around the World in 80 Faiths TV series for the BBC – from taking part in an epic harvest festival in famine-torn Ethiopia, to his adventures as an initiate sadhu holy man in the Indian Himalayas – the audience listened in rapt fascination, the silence intermittently dispersed with ripples of laughter.  Peter also shared wisdom and moral messages gleaned from his travels, including the importance of sharing generously, and the vitality of laughter.

Laura Young, Head of Sixth Form (pastoral) at Prior Park College, who booked Peter’s “Around the World in 80 Faiths” talk for the school’s weekly General Studies lecture programme, said:

“Our students were blown away by Peter’s talk and his unique delivery style. They were captivated in a way I had not seen before. Peter inspired them to look outside their lives and think about the wider world and their role in it. So many tales to tell I could have listened to him for hours.”

“I loved the talk, it was the best one out of the two years of sixth form so far. I really enjoyed the stories about all the places he went to and about the individual people he met. I was really struck by the question Peter posed from his travels in Ethiopia – why do we forget to share? In Ethiopia they manage to share when they have nothing, yet in the West we can’t even share when we have so much.  It’s something I will be thinking about in school.”

“It was such a life affirming talk. It’s so easy in this day and age to overlook what’s really important because we’re surrounded by all this materialism and a lot of chaos. The whole thing in Ethiopia about learning to share is so simple and yet it matters so much. Simultaneously I am not really a religious person but I do meditate and I find spirituality important. The talk inspired me to self reflect and to reflect on my environment. It was brilliant!”

As a Christian priest – has Peter Owen Jones’s experience of so many global faiths changed his perception of Jesus? He was asked in the talk’s Q&A. Replying that his view of Jesus had changed profoundly, Peter explained that Christianity in the West had become a moral system with too many rules attached to it. He said:

To view a video clip of Peter’s full response to this question CLICK HERE.

“There was a real buzz of excitement in the air and a pin drop silence in the room! So be sure to get out there and travel to lots of these exciting places on your Gap years. And remember that point Peter made – how can we be generous and share?  And don’t forget to laugh!”

With new guidelines to be issued by Ofsted in 2015 calling for schools to – Improve the spiritual, moral, social and cultural (SMSC) development of pupils – Peter Owen Jones is the first of many leading spiritual speakers to be offered for educational talks in schools in the coming months by Conscious Frontiers.

FOR FURTHER INFORMATION PLEASE CONTACT WILL GETHIN AT CONSCIOUS FRONTIERS: