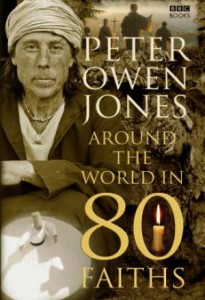 Peter Owen Jones, the maverick 21st century priest, TV presenter and interfaith explorer – celebrated for his fascinating BBC TV documentaries like Around the World in 80 Faiths and Extreme Pilgrim – is currently offering talks to schools, sharing his experience of exploring over 80 faiths in more than 50 countries for the filming of the Around the World in 80 Faiths series.

Peter is the first of many high profile Inspirational Speakers soon to be offered for educational and motivational talks and seminars in schools, universities, businesses and other organisations by Conscious Frontiers.

In his Around the World in 80 Faiths talk, Peter will share enlightening and colourful anecdotes and stories from this epic 14-month journey he undertook during 2008-2009 for the eight part series.  He will also disclose remarkable incidents and encounters he experienced off camera.  With sufficient time now passed for him to have digested the sheer wonder, depth and breadth of this experience and reflected on the nature of the human quest for purpose and meaning, Peter is eager to share his insights with schools, as well as some of the surprising commonalities of the world’s numerous religious paths.  Many of these insights are included in his forthcoming book, The New Humanity.

“Young people are now growing up in a religiously plural context,” Peter elucidates. “While it’s hard enough getting your head and heart around one religion, to be endlessly bombarded by information about the religious dynamics of the human race via the media, internet and society, is on one hand confusing, while on the other hand tremendously liberating – for it allows for a manner of exploration and questioning that up until now previous generations have not been able to engage in.

“The questions however that most religions are asking have common threads and my aim is for this presentation to enable those attending to reflect on those questions individually and to ultimately appreciate that these questions have driven and continue to drive humanity in its quest for meaning and reality. I hope that sharing my experiences will provide a useful platform from which to better understand and assimilate our multi faith society.”