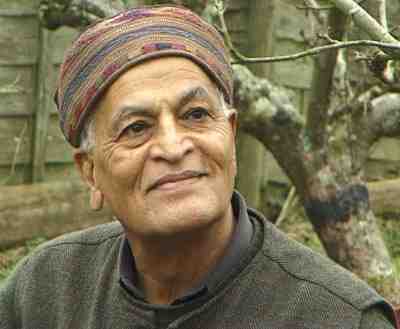 We are delighted that Satish Kumar – one of the leading lights in the global spiritual ecology movement – will be sharing his remarkable vision and passion for creating a more sustainable and just world at the Future NOW conference we bring to the Trinity Centre in Bristol on Saturday 8th November.

Satish, who has been editor of the UK’s flagship eco-spiritual magazine Resurgence (now called Resurgence & Ecologist) since 1973, was selected as one of a few of the world’s leading ecological visionaries to contribute to the iconic book, Spiritual Ecology: The Cry of the Earth, which served as a major inspiration for Future NOW, offering a spiritual response to the current ecological crisis.  In his essay for the book, entitled  ‘Soil, Soul and Society’, Satish impresses the importance of appreciating the sacredness of nature and shares his vision for our planet where all 8.7 million species live and thrive connected as one interdependent global family without any sense of separation from each other. He also expresses the importance of taking care of our “inner selves” by living a simple life engaged in spiritual practice, imparting that “the inner landscape of spirituality and the outer landscape of sustainability are intricately linked”.

His also essay shares his concern that in developed countries, where people typically pursue a material path, demolishing their natural capital in the process, happiness remains a distant dream. Satish recommends replacing material concerns and self interest with generosity, mutual care and selfless service. “In a nutshell we need to live a spiritual way of life and engage in the protection of the earth, enlightenment of the self and restoration of social justice,” he concludes.

Satish, who spent much of his childhood as a Jain monk in India, is a renowned ‘Earth Pilgrim’ whose colourful life has taken him on some remarkable pilgrimages, including an 8-000 mile peace pilgrimage from India to the USA. He is on the Advisory Board of Our Future Planet and was recently elected vice-president with the RSPCA. In 2008 he presented the highly acclaimed BBC TV documentary Earth Pilgrim, and his many books include his bestselling autobiography, No Destination.

The video clip below shows Satish delivering his impassioned ‘Soil, Soul and Society’ talk for the Conscious Frontiers event programme at Sunrise Festival in 2012. We look forward to seeing what pearls of wisdom he’ll unleash at Future NOW!

For more information and to book tickets for the Future NOW conference visit: www.futurenow.consciousfrontiers.com