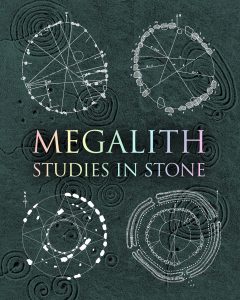 Megalith: Studies in Stone, to be published on summer solstice 21 June, featuring eight leading authors in the field, is the first global study to fully reveal the remarkable complexity of stone circles and Neolithic art.

“Megaliths are our oldest stone monuments, yet we understand very little about them. Imagine Britain without Stonehenge, it remains one of the most iconic temples of our island, yet few people realise you can learn more useful things about the sun and moon from Stonehenge in ten minutes than you can in 16 years of school. This book reveals the astonishing complexity of the megalithic culture by focusing on what our ancestors left behind, raised and carved in stone. Instead of rough rock circles, we repeatedly find evidence of sophisticated geometry, astronomy and surveying.”

Opening with the first global overview of the stone circle phenomenon by leading megalithomaniac Hugh Newman, organiser of the international Megalithomania conference – who has visited hundreds of ancient sites across the planet – the book sheds light on many of the mysteries surrounding them. What are they? When were they built and why? Why are so many of them egg-shaped, or geometrically flattened? How do they correlate to the landscape, sun, moon and stars?

Megalith also gives an unparalleled overview of five of Europe’s most complex megalithic sites. Presenting the evidence for a unified megalithic philosophy, the book demonstrates that these ancient architects were attempting to build something much more ambitious than ever previously realised. 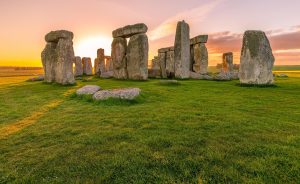 Leading Stonehenge author Robin Heath shares his exciting new synthesis of the astronomical function of Stonehenge, answering many of the mysteries about the site. How do you predict eclipses using Stonehenge? Why were the bluestones brought all the way from Wales? Why do the sun and moon marry every nineteen years? This enlightening section brings rare insights into Britain’s most intriguing and visited tourist destination.

Howard Crowhurst, the world’s leading interpreter of Carnac in France, presents a groundbreaking analysis of the the most extensive Neolithic site on earth.  Why did the ancient Bretons erect over 20,000 menhirs (standing stones) at Carnac?  What was the purpose of the alignments, rectangles and dolmens (tombs)?  Crowhurst finally unlocks Carnac’s secrets, revealing the sophisticated geometry at the heart of this ancient temple.

Evelyn Francis unveils compelling new research on the secret geometry of Avebury, the largest stone circle in the world, and investigates myths that a lost science was once practiced here. Gordon Strong shares new discoveries at Stanton Drew (south of Bristol), the forgotten remains of the third major Neolithic temple complex of Southern Britain, after Stonehenge and Avebury.  And Gerald Ponting discloses fascinating revelations about Callanish, ‘The Stonehenge of The Hebrides’ on the Isle of Lewis – one the most incredible stone circles ever built. Why would the hard-pressed farmers of five thousand years ago go to such trouble to erect such huge monuments?

Megalith contains full-page reproductions of over 20 rare geometrical surveys of stone circles made by Professor Alexander Thom in the 1960s and 1970s.  Even a glance at these rarely viewed surveys will convince the reader that the flattened circles, eggs and ellipses – the shapes of many of the stone circles which survive today – were totally deliberate and carefully constructed. The book also presents Chris Mansell’s artistic overview of Neolithic rock art, exquisitely illustrated with 19th century engravings and lithographs of the best examples of rock carvings from around the British Isles to tell its story. 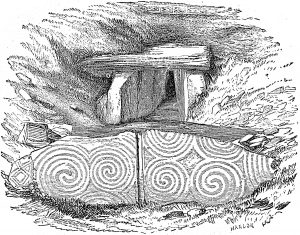 Following 15 years of meticulous picture research, Megalith is illustrated throughout with the finest collection of antiquarian engravings and plates of megalithic sites ever assembled in in a single volume.

John Martineau says: “The use of rare engravings and drawings particularly highlights the perennial fascination that these ancient sites have continued to hold for later civilisations. In an era of religious fragmentation and spiritual questing, these beautiful megalithic temples hark back to a more ancient, integrated vision of the cosmos. Stone circles suggest an attempt to bring heaven to earth. Even today, they are soothing and enlivening for body, soul, mind and senses.”